“Carrying on the tradition”

The cadre of Trojan Battalion are individuals who have demonstrated all the desired and necessary traits to become an Army officer and have excelled in their specific field and craft through years of experience. Each cadre member posses the passion and desire to train the future of the United States Army’s Officers and are eager to share their knowledge with those they train. 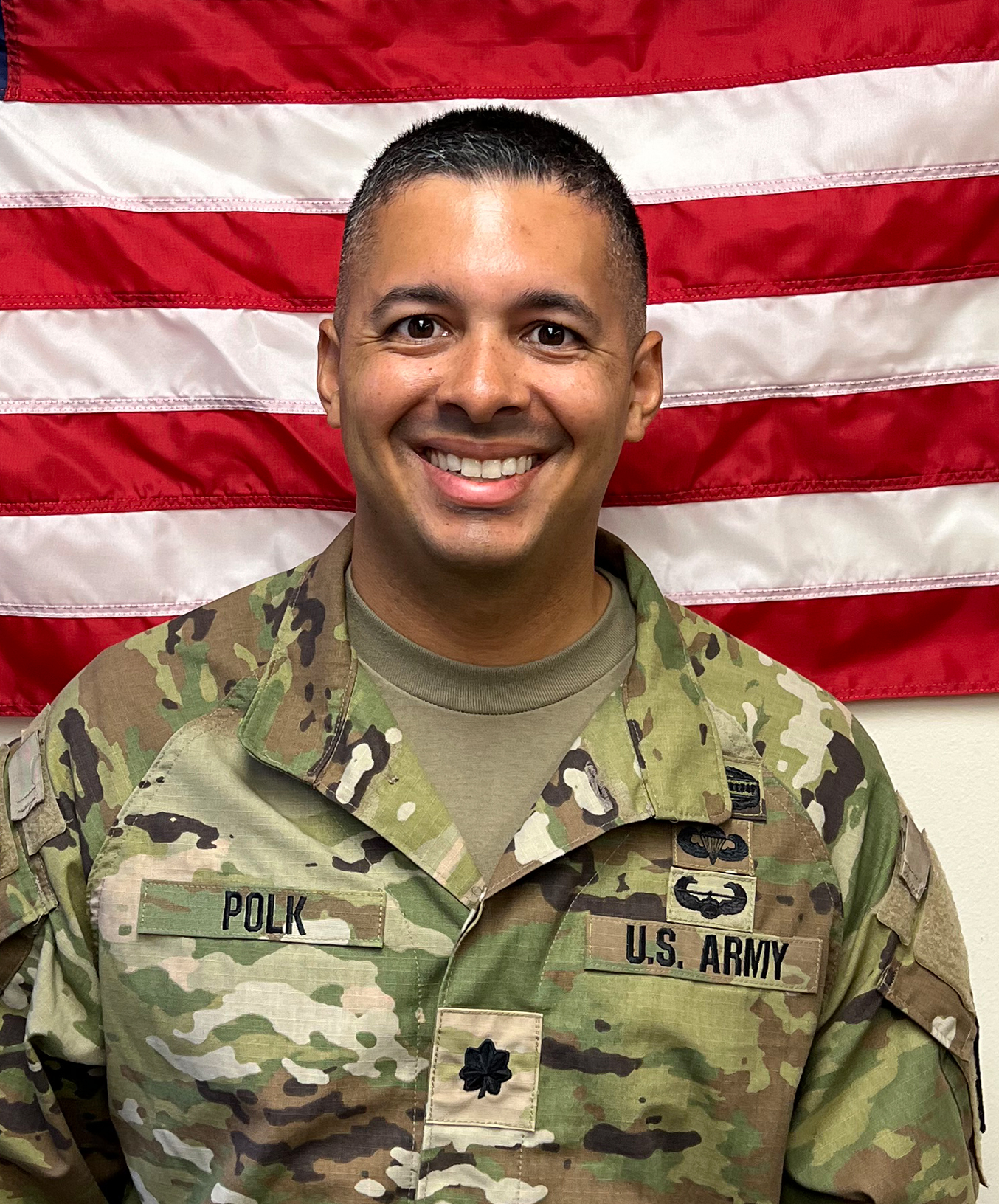 LTC Eric Polk is a career US Army Officer who arrived at the USC Army ROTC program in July 2022. His sixteen years of Active Duty service began with his commission through ROTC at the University of Southern California in 2006. Immediately following, he was assigned to support counternarcotic and hostage rescue activities in South America. He then volunteered for a combat deployment to Iraq as a Combat Advisor. Upon return, he completed advanced intelligence training and served with the storied 82nd Airborne Division in multiple intelligence leadership positions.

LTC Polk then became a Strategic Intelligence Officer and attended graduate school in Washington DC. Following the receipt of his masters, he headed to Europe to support US and NATO operations and their Eastern European partner nations. Upon return to the United States, LTC Polk served at the Defense Intelligence Agency in Washington DC followed by several years as a key leader within Special Operations and interagency partners. While in the National Capital Region, he deployed to Iraq for a second time. His most recent position was at United States Central Command as a Planner/Executive Officer supporting contingency and crisis response operations.

He is an esteemed graduate of the Army’s Airborne and Air Assault schools, Command and General Staff College- Officer Course, and the Joint Forces Staff College. He is also a Badge & Credentialed Counterintelligence Agent, a Department of Defense certified Joint Intelligence Planner, and graduate of the US Army War College Defense Strategy Course. He holds dual undergraduate degrees in History and East Asian Studies from the University of Southern California, a master’s degree from the American Military University in Intelligence Studies, and a master’s of Science in Strategic Intelligence (MSSI) from National Intelligence University with a Eurasia Concentration.

His professional passion lies in mentoring, developing, and inspiring future leaders in the US Army. He hopes you will consider bringing your talents to the Trojan Battalion ROTC team and joining a historic legacy! Fight on forever! 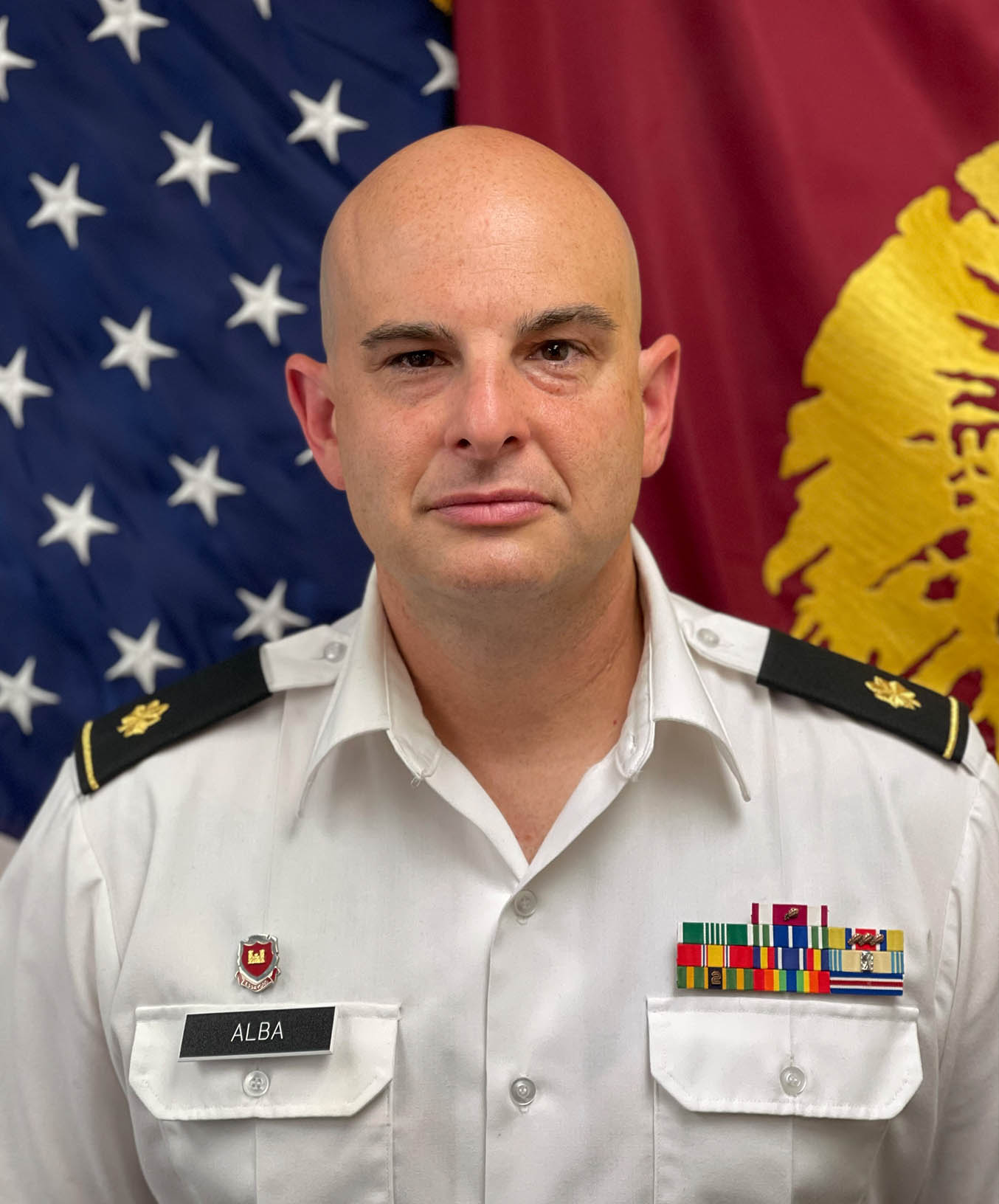 MAJ Nathan S Alba is an Active Guard Reserve (AGR) Engineer (EN) Officer that has been assigned to the USC Army ROTC program since September 7, 2020. He is currently serving as the Executive Officer (XO) for the program.

His previously served in the 463D Engineer Battalion (BN) as the S3/Operations Officer in Wheeling, WV from August 2018 to September 2020. Prior to that, he served as the Deputy Chief of the Individual Training Division of the G-37 Directorate at the United States Army Reserve Command (USARC) from July 2015 to August 2018. In addition, he completed a tour as a Brigade/Assistant S3 at the 2nd BDE, 95th Division (IET) in Vancouver, WA from August 2011 to August 2014. Finally, he completed his platoon leader time at the 409th Engineer Company (Vertical) in Fort Collins, CO from August 2007 to August 2011 where he also served as the Company Executive Officer.

He has 3 family members to include his spouse, Rona Alba, and daughters Natalya and Natasha Alba. 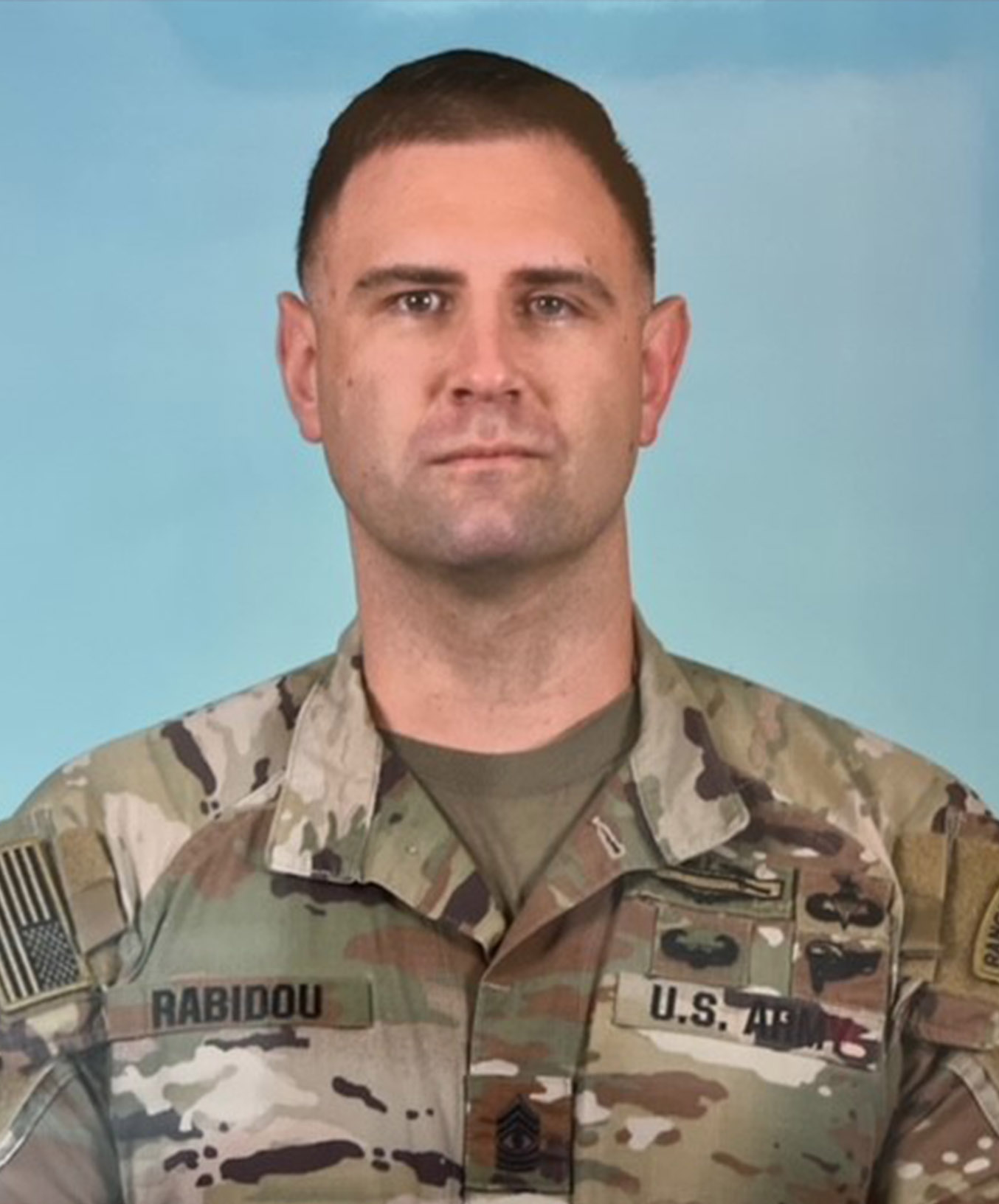 MSG Daniel Rabidou enlisted into the United States Army in 2003 and attended Infantry Basic Training and Advanced Individual Training at Fort Benning Georgia. Over his 19 years of military service, he has served in various light, Stryker and Airborne Infantry units including the 82ND Airborne Division, 6TH Ranger Training Battalion, 2ND Infantry Division, 4TH Ranger Training Battalion, 25TH Infantry Division and most recently as a First Sergeant in 4TH Infantry Division. MSG Rabidou has also served as a Military Science Instructor for Olivet Nazareen University and the Senior Military Science Instructor for Wheaton College ROTC. He currently serves as the Senior Military Science Instructor for the University of Southern California. He is married to Lisa Rabidou, his wife of 8 years and they have two young children Ellie (6) and Jaxon (8). 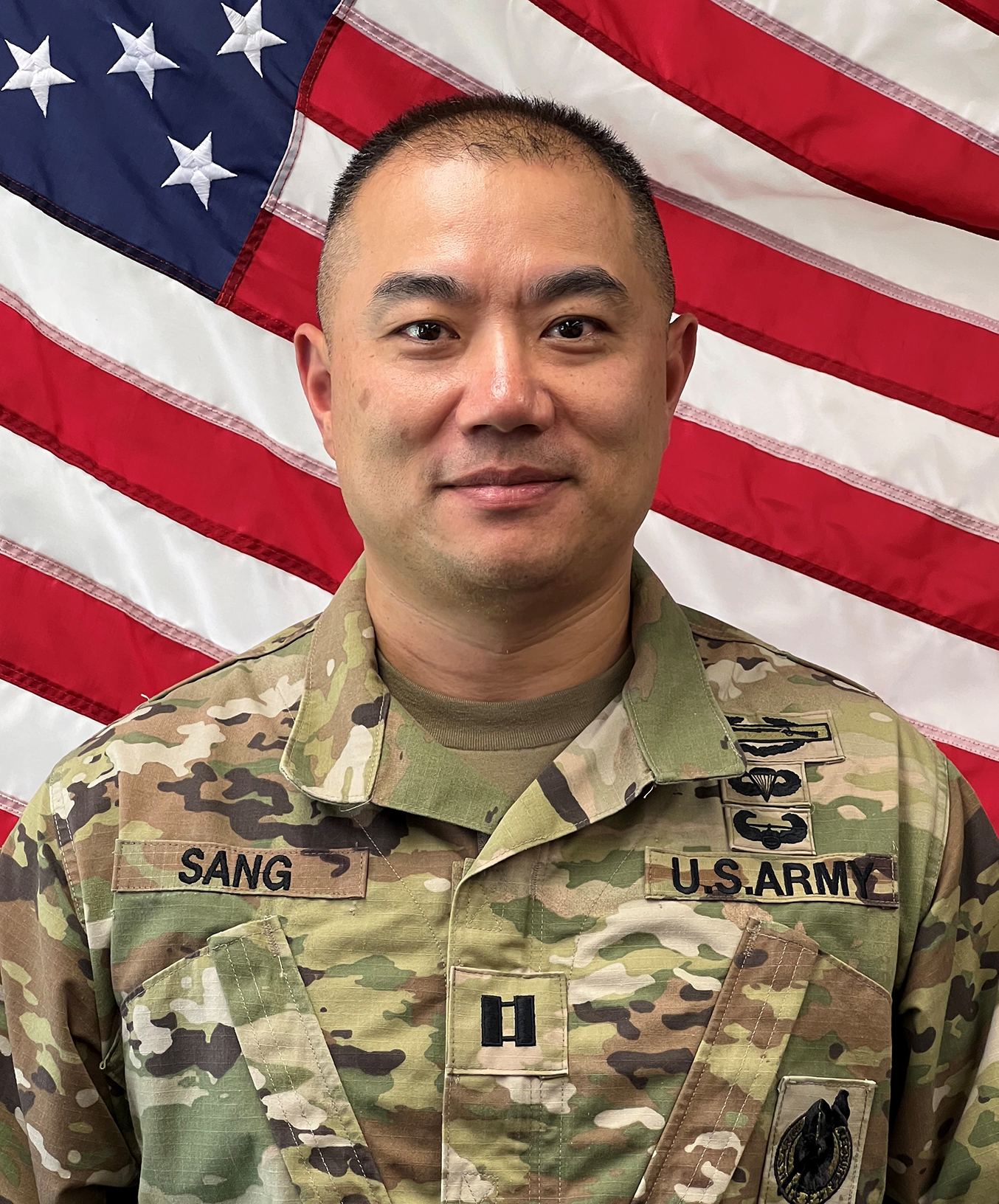 CPT Di (Dee) Sang began his Army career as an Airborne Infantryman in 2005 and later earned his commission in the Quartermaster Corps in 2015. He holds a Bachelor of Science Degree in Business Administration from Post University and completed a Master’s Degree in Business Management from Azusa Pacific University in 2015. He has enrolled in classes in the Master of Science in Global Supply Chain Management Program at USC Marshall School of Business.

CPT Sang’s military awards and decorations include the Meritorious Service Award, Army Commendation Medal (x5), the Army Achievement Medal (x5), the Combat Infantry Badge, the Parachutist Badge, the Air Assault Badge, and the Recruiter Badge. He resides with his wife and children in Temple City, CA 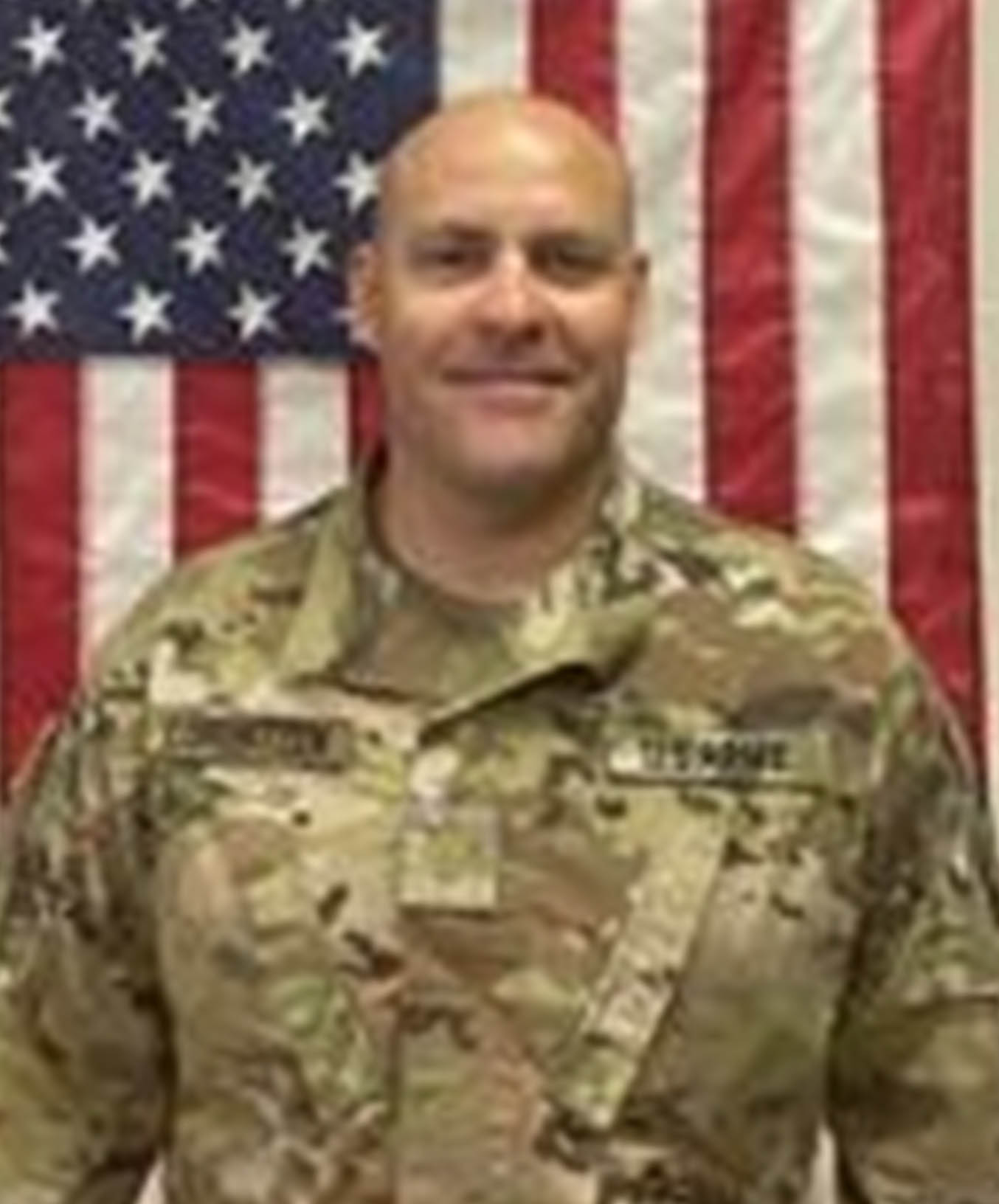 MAJ Drew Lorentzen is an Engineer Officer assigned to the Trojan Battalion since 1OCT20. He is the Officer in Charge at the California State University Long Beach ROTC Program.

His previous assignment was with the United States Security Coordinator at the US Embassy in Jerusalem, serving as the West Bank Training Officer in the Palestinian Governorates from July 2019 to August 2020. From MAY 2017 to June 2019 he served as the Executive Officer for 2-289 IN BN in Camp Atterbury, IN.

He has one son (Drew Colton Lorentzen) 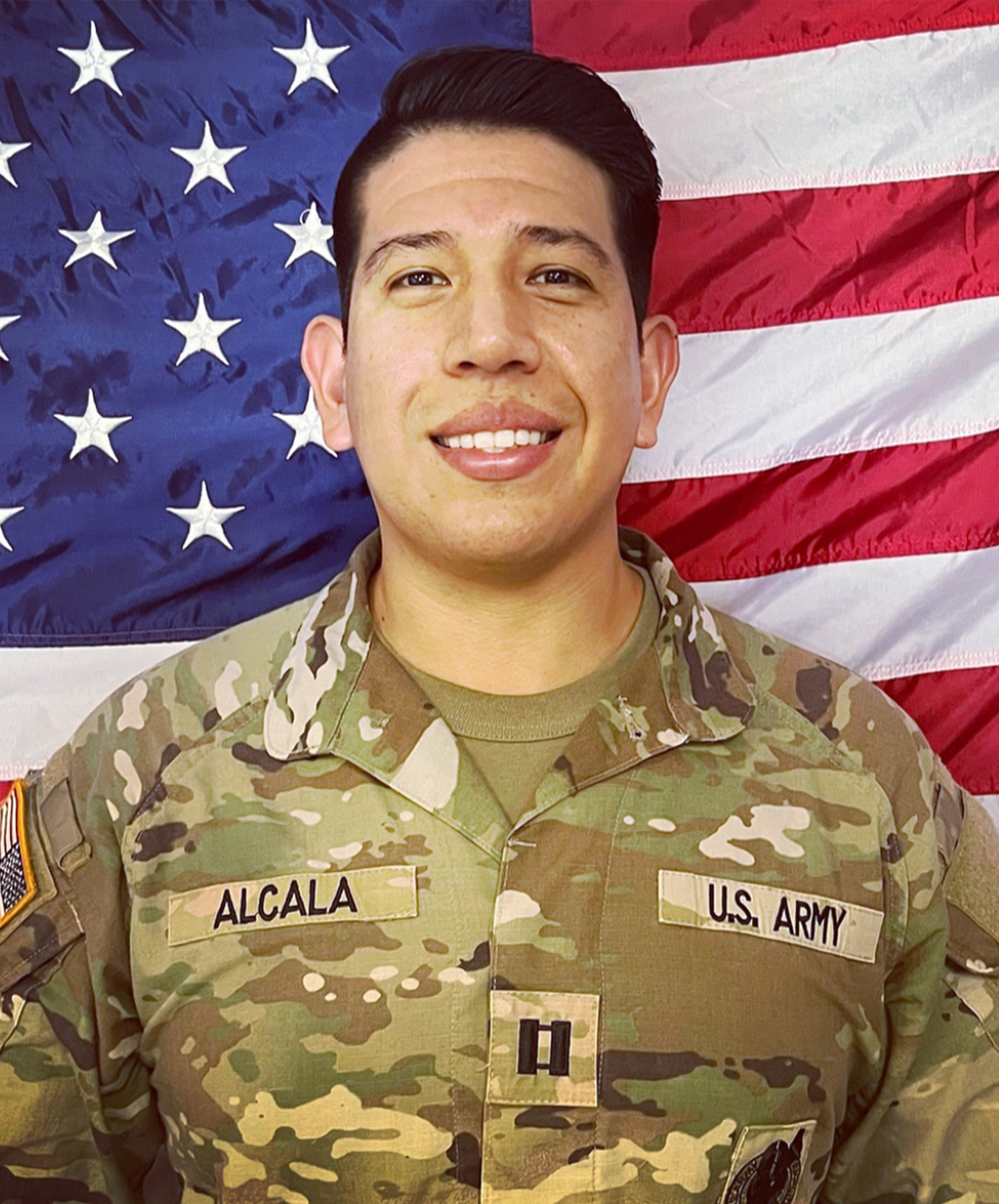 CPT Edgardo Alcala is from Chicago, Illinois. CPT Alcala received his Bachelor of Science from Chicago State University and Commissioned from University of Illinois-Chicago as an Ordnance Officer in 2011. 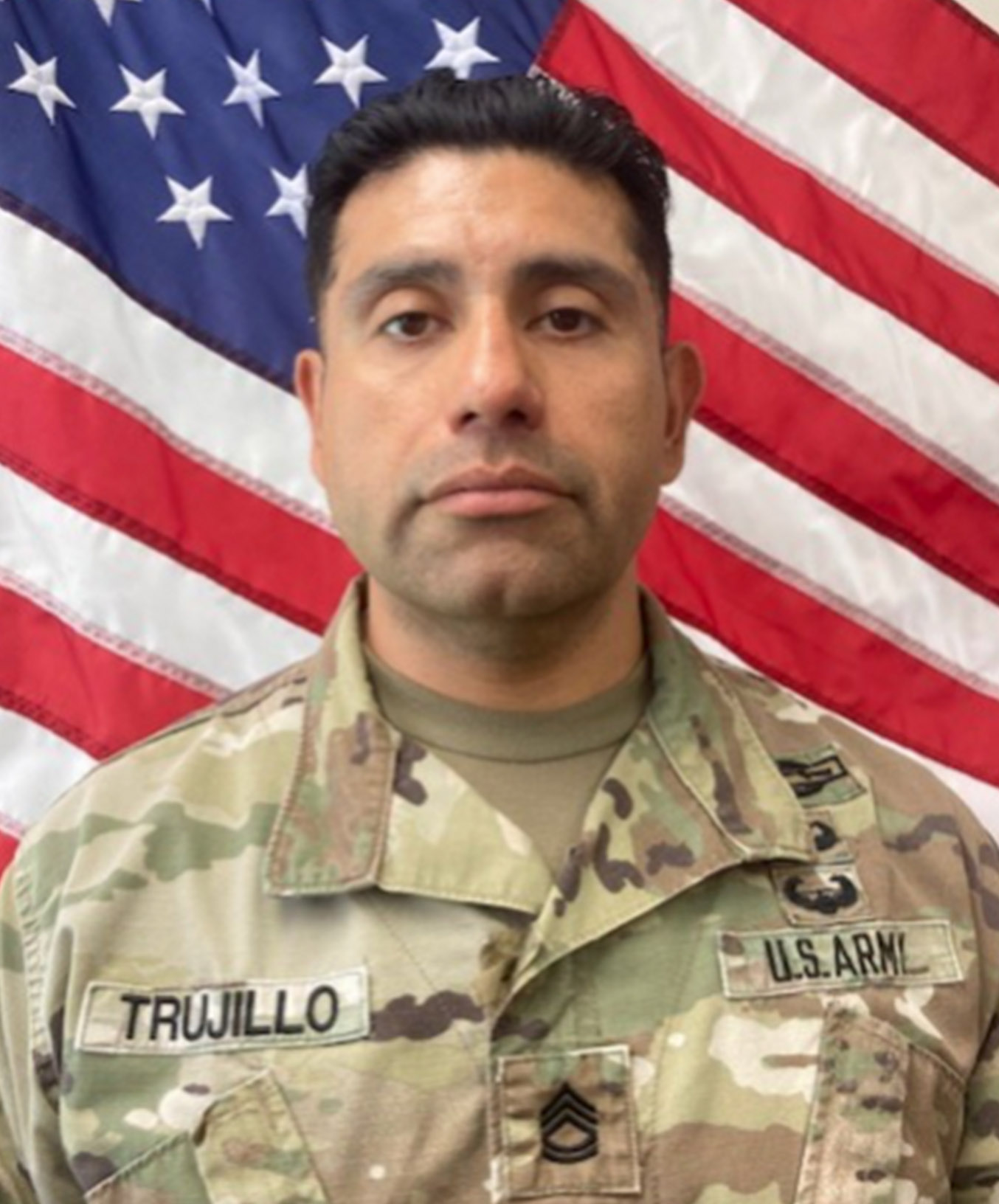 SFC Trujillo began his career as a Light Infantryman in 2007 at 10th Mountain Division, ACO, 2-14INF. He deployed with the unit to support Operation Enduring Freedom and Operation Iraqi Freedom in Sauder City, Iraq from 20091015-20100801 as Team Leader. He re-enlisted on deployment, once he returned back from deployment, he moved to Fort Hood, Tx and joined the 2-38 CAV, Long Range Surveillance unit and deployed to Afghanistan in 20110628-20120528, He then moved to Fort Campbell, KY, ACO, 1-502INF and deployed with the unit as a Squad Leader and returned to Afghanistan in 20140121-20141023. He then had Orders to become a Drill Sergeant in Fort Leonard Wood, MO form 20150826-20180826 where towards the end of his trail time he was picked up for Sergeant First Class and walked on to Airborne School in Fort Benning, GA. Once his time was complete as a Drill Sergeant, his next duty assignment was 82nd Airborne Division Fort Bragg, NC. 2-325AIR, where he was a Platoon Sergeant for Charlie and Alpha Company and also the Assistant Operations Sergeant in the S3 and then deployed with the unit to Iraq and Kuwait to support Operation Inherit Freedom from 20200628-20210122. Once his Key Development (KD) was complete, he reported to The University of Southern California (USC) as a ROTC instructor.

SFC Trujillo has been in the army for 14 years and his military awards and decorations include the Meritorious Service Award (4), Army Commendation Medal with a “C” device, Army Commendation Medal (x8), the Army Achievement Medal (x7), the Combat Infantry Badge, the Parachutist Badge, Jump master, Air Assault Badge, Rappel Master and the Drill Sergeant Badge. He resides in San Pedro, CA, with his wife of 6 years and 2 children. 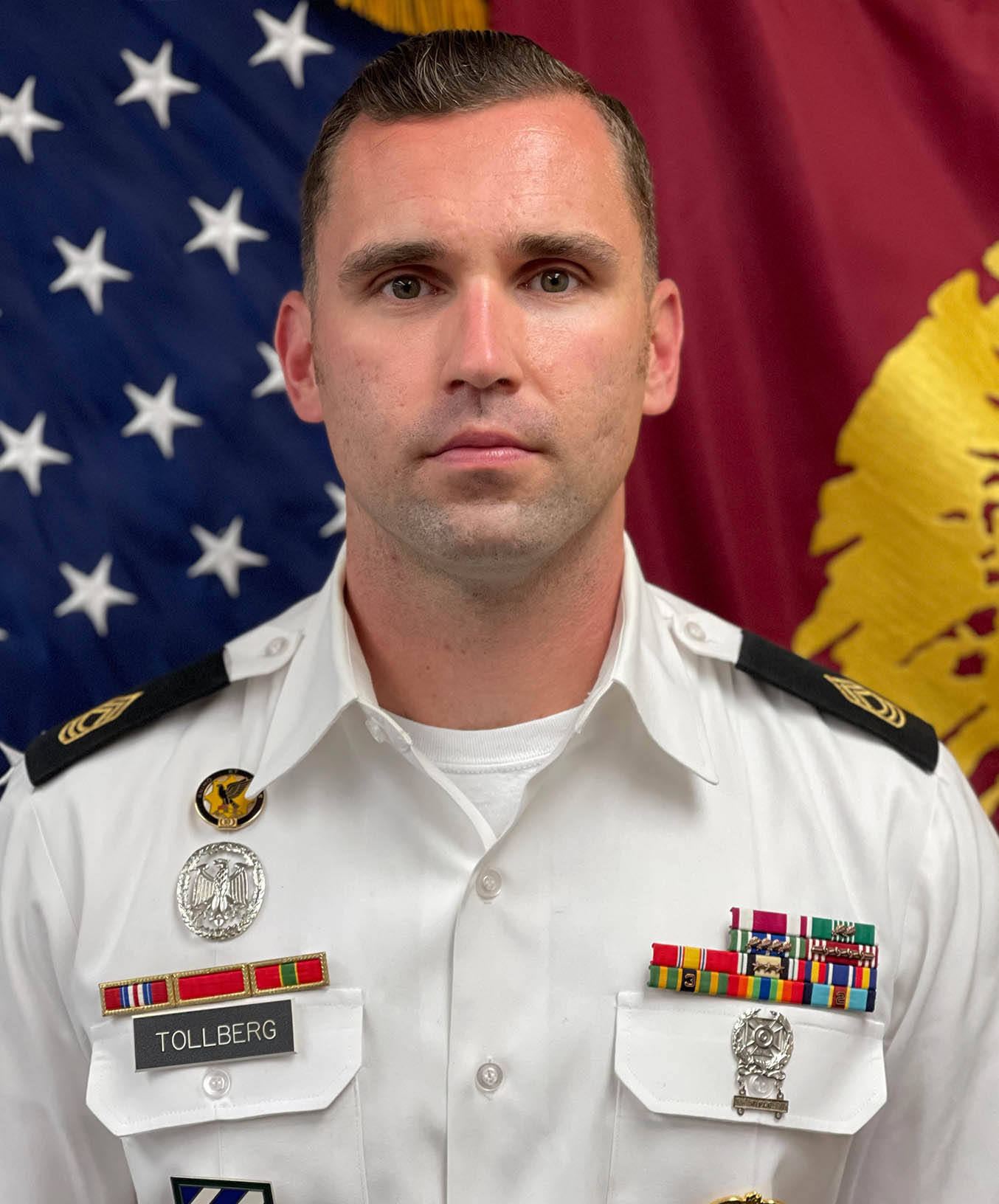 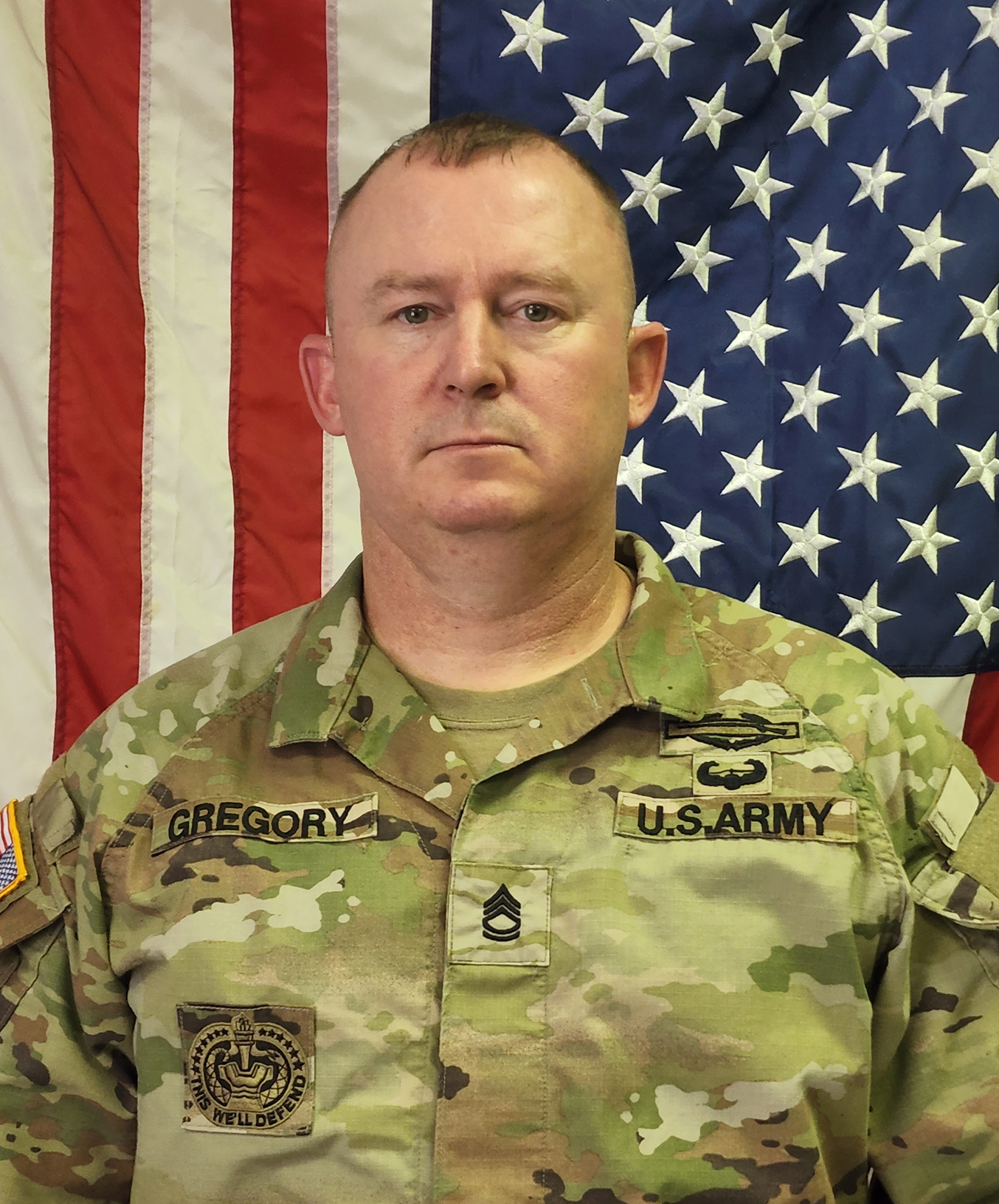 SFC Derrick Gregory is an Infantry Non-Commissioned Officer assigned to the Trojan Battalion since January 2021. He is the NCO in Charge at the California State University Long Beach ROTC Program.

His previous assignment was with the 2nd Squadron, 13th Cavalry Regiment at Fort Bliss, TX. He served as the C Troop, Mortar Section Leader from October 2018 to December 2020. 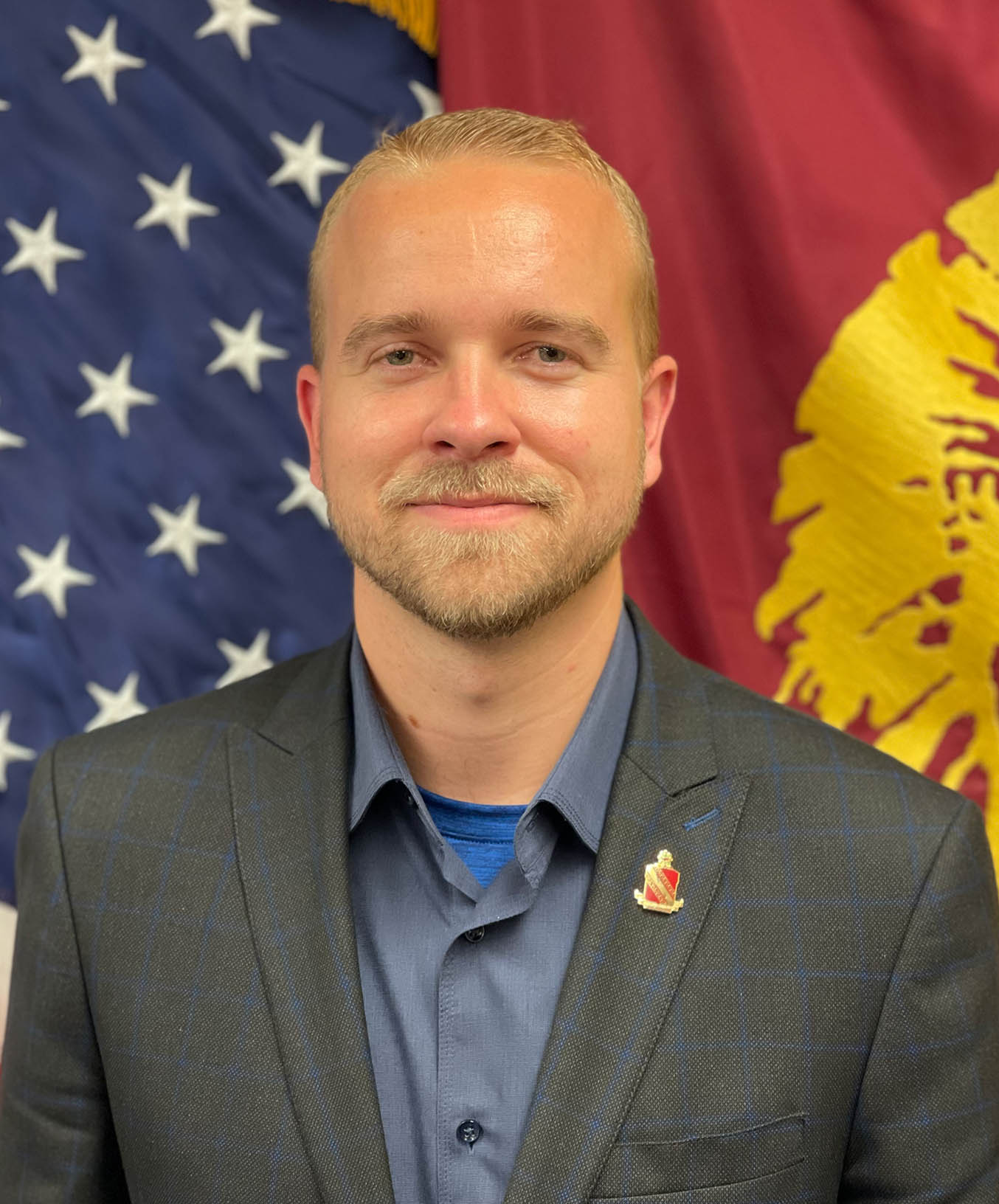 Matt Turner is a veteran of the US Army Air and Missile Defense community and an experienced educator from the State of California. He is a graduate of California State University Long Beach and commissioned through Officer Candidate School at Fort Benning, GA. His career is marked with great success as an Operations Officer for Air Defense attachments at Fort Hood, TX. He served as a Tactical Control Officer for Patriot Missile Defense systems in the Middle East with 69th Air Defense Brigade, while also acting as liaison to allied forces in the region. He has since transitioned from Active Duty military service to the role of civilian Military Science Instructor. He joined the USC ROTC team in 2020.

He is committed to educating the future leaders of the US Army and dedicated to helping students achieve their aspirations. 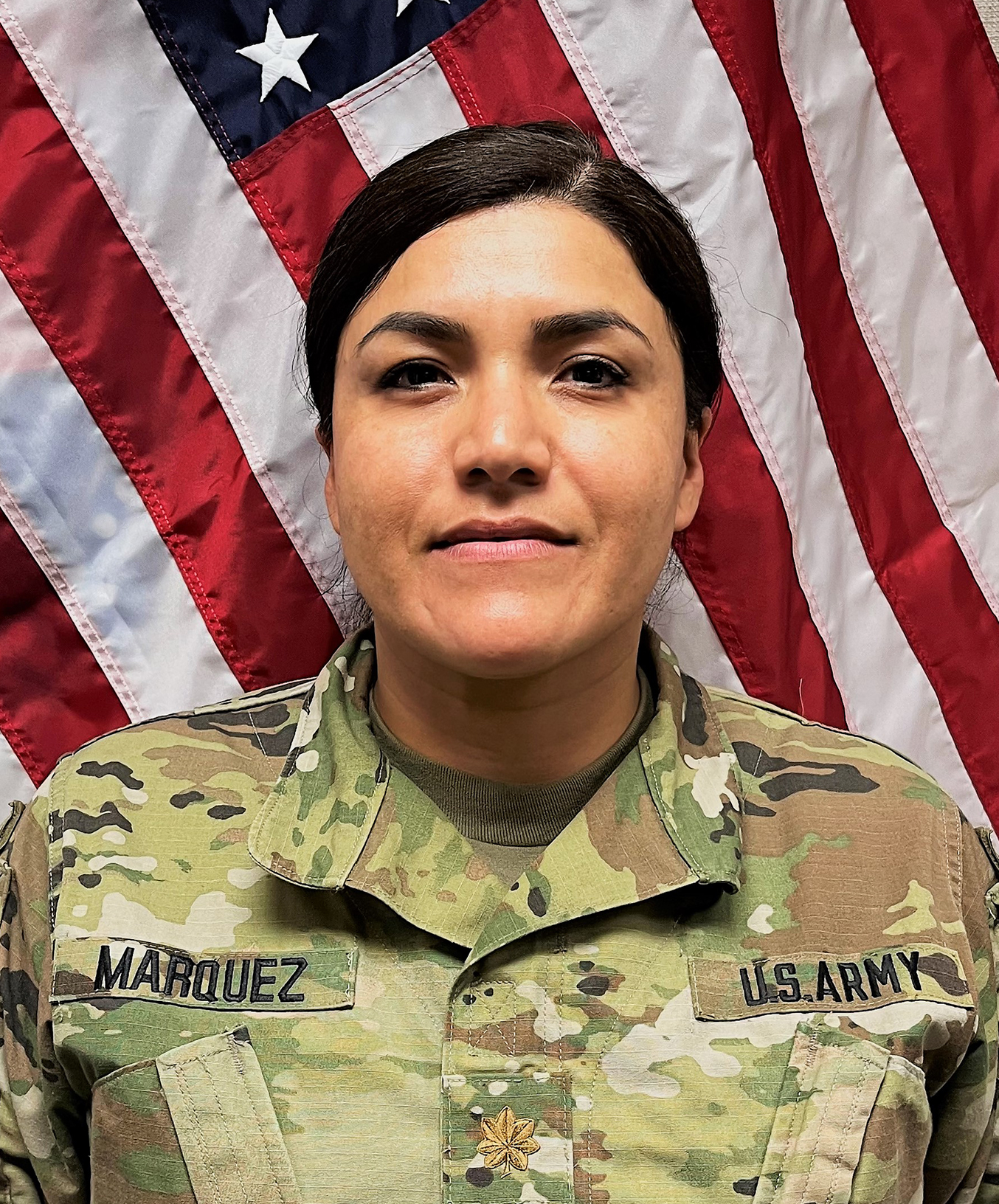 MAJ Joann Marquez is a career US Army officer who arrived to USC ROTC in August 2022 with over 19 years of Active Duty service. She is currently serving as an APMS at California State University Long Beach.

MAJ Marquez earned her commission at CSULB in 2010, then served as a Company Executive Officer for 2-9 IN in the Republic of Korea. In 2013, she deployed to Afghanistan and upon her return, she served as the 2nd Engineers, Forward Support Company Commander.  Subsequent operational assignments include key staff positions with the 3rd Brigade Combat Team, 1st Armored Division in Texas and the 45th Sustainment Brigade in Hawaii. Most recently she served as the Brigade S4 for 17th Field Artillery Brigade at Joint Base Lewis-McChord.

She is a graduate of the Chilean Intermediate Level Education, Logistics Captain’s Career Course, and Quartermaster Basic Officer Leadership Course. MAJ Marquez holds an undergraduate degree from CSULB and a Master’s Degree in Public Administration from the University of Southern California. 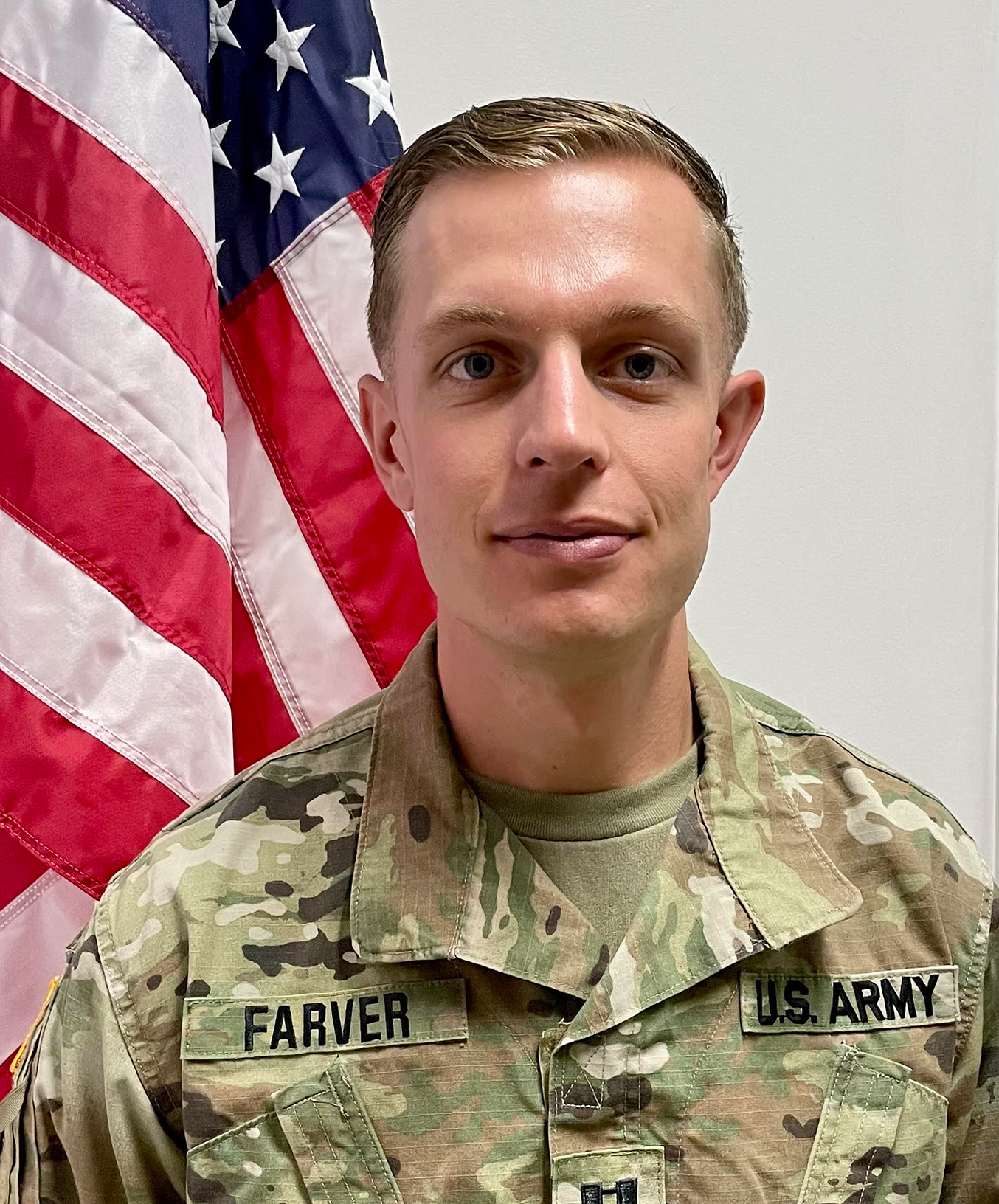 Captain Jeremy Farver is from Bay Village, Ohio. CPT Farver received his Bachelor of Arts in Political Science from Otterbein University and commissioned from Capital University as an Air Defense Second Lieutenant in 2014.

​Throughout his military career, he has served in numerous leadership positions. He began his career as a Tactical Control Officer and Launcher Platoon Leader in Bravo Battery, 3-43 ADA at Fort Bliss, TX. Following that he transitioned to the role of Battery Executive Officer. In January 2017, CPT Farver was selected to be the Executive Assistant to the Deputy Commanding Officer of 32d Army Air and Missile Defense Command. He served in the front office of 32d AAMDC for 16 months before transitioning to 1-43 ADA to deploy to Qatar and the United Arab Emirates from October 2018 to May 2019.  While in 1-43 CPT Farver served as an Executive Officer, and the Assistant S3. After attending ADA CCC CPT Farver PCSd to Fort Bragg, NC and deployed to Qatar with the BDE Headquarters. He then assumed command of C/1-7 ADA and deployed to Bahrain from 2021-2022.  ​

USC is all about how we fight on and achieve victory. As members of the USC Army ROTC program, our Cadets develop themselves everyday to live by these mottos. From physical training to top tier academics to enjoying the vibrant city of Los Angeles, Trojan Cadets work together to improve their own skills and capabilities with theory peers in the program.

ake the road less traveled and immerse yourself in a culture of valor and service to country. ROTC is the premiere leadership program in the nation that shapes the college aged youth into Americas finest.

ROTC fosters a community of virtues and brings together the nations best individuals who are ready to work together to help maintain the best Army the world has ever known.